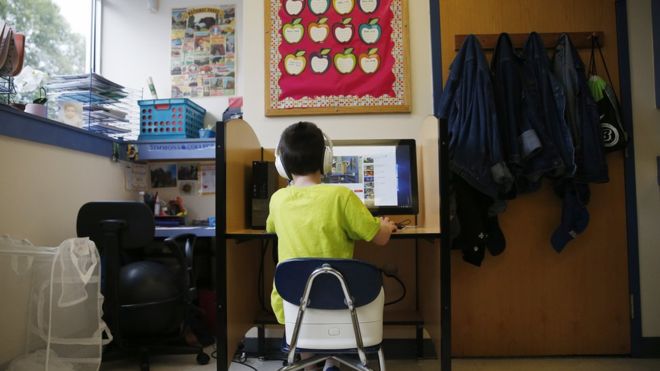 The number of children home-schooled is “rocketing” and “no-one knows how they are doing academically, or even if they’re safe” Anne Longfield said.

She also had concerns about provision for special educational needs (SEN).

The report found a small number of schools were responsible for the majority of children moving to home education.

Ms Longfield said her office will collect data from councils in England to publicly identify the places that have high numbers of children being withdrawn from mainstream schooling.

School ‘for all children’

Ms Longfield is concerned some more vulnerable pupils could be “off-rolled” – where children are encouraged to move by their school.

She said: “Many of these children are very vulnerable, have special educational needs, or are unable to cope with a ‘one size fits all’ school system.

“Schools should be for all children, including those with complex needs and those who struggle academically.”

The Children’s Commissioner Office analysed figures from 11 local areas and found a 48% rise in the number of children withdrawn from school.

Between 2016/17 and 2017/18 academies in the London borough of Hackney saw a 238% increase in the number of children being home-schooled, the report said.

A spokeswoman for the Department for Education said: “Where children are being home educated, we know that in the vast majority of cases parents are doing an excellent job.

“We also know, however, that in a very small minority of cases children are not receiving the standard of education they should be, which is why last year we ran a call for evidence on proposals to introduce a register, as well monitoring of provision and support for home educators.

“We will respond to that in due course.”